This post was inspired by Allie! I promised I would do a post on some of my past experiences with online dating after I commented on her post about online dating exposed. You know, because everyone can use a laugh! For those of you who might be new around here or maybe forgot our dating/engagement story, you can find it here.

So now that you know that if there was an OK Cupid commercial, Chris and I would be one of the statistics about couples who fell in love and got married. But, before this wonderful love story….there were a few umm…let’s call them bloopers. I am sure many of you are aware that there are toads and trolls live among all the princes on white horses online, just as they do in real life. I got the distinct pleasure of meeting a few of them. How lucky right?

Oh and a little disclaimer. I come up with names for people sometimes. In high school my friend and I would use these names so that we could talk about people and others wouldn’t catch on. She had a crush on a boy whose locker was next to her, she called him Locker Boy.

So we aren’t going to pretend that Chris is the only person I dated. I had a few relationships that made it past the first few dates, as did he. One in particular lasted about 2 years. We shall call him “The Liar.” Anyways to make a long story short, I started to figure out something that he was doing. I had suspicions that one of his “friends” was more than just a friend. He broke up with me shortly after I started to catch on, then when I confronted him about my suspicions he made up a story about how he broke up with me because he found out that he had brain cancer and didn’t want to put me through all that. That he was doing it for me. Um right. I later confirmed and had hard proof of my suspicions. That “friend” ended up knocked up and married to him shortly there after. While I usually wouldn’t wish illness or hardship on anyone, that mofo deserves to get what he claims he had.

After that relationship, I had several winners. My favorite is Rock Boy. My communication with Rock Boy never went past phone conversations. You want to know why? Our last conversation went a little something like this. Rock Boy, “So I watched my friends kids last night so that she could go out on a date. They were wanting to play video games and watch TV the whole time. Crazy right? What a waste of time that is. Well, I happened to be carrying some rocks in my pocket and I had an idea! I shut off the TV and told them no more of that, that we were going to do something fun! We are going to examine these rocks! Look them up, identify what they are and what makes them so special. The kids were really digging my rocks.” WTF. Are you kidding me? What grown man carries around rocks in his pockets? Further more, making a statement like the kids are really digging my rocks leaves me to believe that you are several layers of crazy and I just…cant. I never spoke to him after that.

Then when you think things couldn’t get any weirder. Enter The Crier. The Crier was a special breed of crazy. We went on our first date, and he seemed normal enough. He was sort of sweet, and he really seemed to have his shit together. He had a really nice house, 2 nice cars, a great job, he dressed alright and he had manners. He opened my doors, pulled out my chair and told me I was pretty on our first date. All seemed ok. I decided to go on a few more dates with The Crier. Then one day, after 3 dates with this boy whom I have known for about a month mind you, I am walking around Target and I get a phone call. He says he wants to have  serious conversation with me. He goes on to talk about how he likes to travel a lot. I already know this because he told me about his trip to Japan on our first date. It sounded incredible. Good for him. Well then he says, well I would like for you to travel with me when I visit these places. I said cool, I haven’t been many places before, maybe sometime we could plan a trip. Then he asks me if I would swing by his house. I headed over there after running my errands. He has me sit down and says, “I think you need to go ahead and get rid of Gracie.” I looked at him and said, “Excuse me?” Then he said, “Well you cant travel with me if you have a dog. She is holding you back.” I was like “Um, people that have dogs travel all the time. They get their friends to watch them or there are these places that board dogs.” Then he starts to cry. He can’t believe that I am being ridiculous about a dog. He said that he really liked me and didn’t understand why I wouldn’t get rid of my dog for him. At his point he is weeping like a 5 year old girl.  WTF? I stand up, completely pissed off and sort of scared because this is shade of crazy that I just wasn’t expecting. I told him that I was really sorry but that there is no way in the world that I would give up my dog for him. Especially seeing as how I have known him for less than a month. I went home and had a girl’s night with my dog. We watched TV and laughed at The Crier. 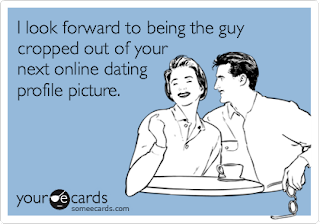 There are a few others, but those are the top 3 contenders on my list of cray. Here is my advice for online daters out there, communicate MANY times before actually meeting someone. I always would email with someone first. Or use the chat through the website. Then, when you feel comfortable enough with that, maybe give them your number for texting and make sure you have a few phone conversations too. A lot of crazy will start to show on the phone. Rock Boy is a good example of that. I am pretty confident that he is creeping in a white van in a neighborhood full of children somewhere in Atlanta. That is where I lived when all this happened, so what out Atlanta….these fine men are cohabiting in your city.

It’s About to Get REAL Up In Here

But…what will I wear?