Domestically Challenged. It is a magnet that remains on my refrigerator from my earlier, single years.

When I was in college, Jessica Simpson was married to Nick Lachey and didn’t know the difference between tuna fish and chicken. She was pretty and ditzy, and there were pictures of her in her underwear with a Swifter on the cover of Rolling Stones titled “Housewife of the Year.” 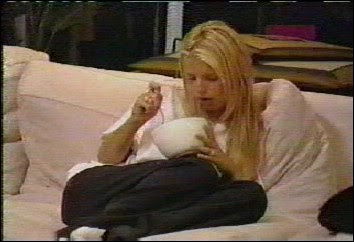 Oh, so wait…it is cute that a girl is ditzy and doesn’t know how to do anything for herself and asks dumb things? Is it  hot that she doesn’t know the difference between tuna and chicken? Because I am pretty sure that even I get that. Guys will marry an undomesticated cutie with the cooking abilities of a 5 year old? Maybe we don’t need to learn how to cook, my friends and I thought.

Don’t worry, I did finally realize that any guy worth having wants a girl with an IQ higher than 60 and can at least make some Kraft Mac n Cheese and frozen chicken tenders without burning down the house. So when is it that I became domesticated?

I think it happened in stages. When I was in middle school, my mom had started working full time again since my sister was in school. We were on “double sessions” meaning that elementary school kids went to school at a normal time, high school students went from  6am to around noon and middle school kids went to school in the afternoon, getting out at night. I had to learn to fend for myself. Pack my own dinners for school, and make my own breakfast and lunch at home. I was responsible for waking up on my own, getting ready and getting myself to the bus. I learned how to make mac n cheese, grilled cheese, warm up frozen “tv dinners” as they used to be called, etc.

In college I learned how to do laundry, you know….because my mommy didn’t live with me anymore. I was still “cooking” for myself, I even learned a few new recipes like scrambled eggs, mashed potatoes, and how to work a George Foreman grill. I didn’t like to cook, but it was a necessity so I did the bare minimum to get by.

Since moving in with Chris a few years ago, I have actually enjoyed cooking, and baking. I like to take care of the person I love, and have him enjoy the foods that I make for us. I have tried all kinds of new recipes and even dabbled in making things up as I go. Most of the time my food turns out pretty good. There are always a few kitchen fails, but for the most part…I like to think of myself as fully domesticated and a decent cook. I cook, I clean, I do laundry, I clean my car, I iron (that is a miracle in its own), and I love decorating our home and even shopping for kitchen items is exciting now! My heart flutters when I walk into William Sonoma and see all the awesome things that I can never afford! Who would have thought?

Some people might think it is old fashioned that the girl does all the cooking, cleaning, etc. Maybe it is. It is how my family ran, and how my parents families ran. I enjoy taking care of those things, and I wouldn’t do it all if I didn’t want to. I feel sooooo accomplished Saturday morning when I have the whole house clean before lunch. I am not saying that there is something wrong with not being domestic, it is just what works for me. Never thought I would say.

While I leave up my Domestically Challenged magnet because I remember where I came from and I think it is funny, I feel like I finally have figured it all out. When did you realize you became….domestic?