Topic: A story about a time you were very afraid.

I have already shared the most frightening time of my life with all of you back in April, when I told my story of the April 27th tornados and how they impacted my family. I would rather not rehash that and share another time I was afraid.

Anyone who has had me as a passenger in their car could probably tell you that I can be a little anxious in the car. I promise, I have good reason behind it! My story goes a little something like this.
It was spring break 2001. I was a senior in high school and my dad took my sister and I to St Louis for a few days to visit our friends. (We lived in MO for a few years while I was in middle school and early high school.) Our last night there my dad took my sister to the hotel pool and let me take the family car (a brand new Chevy Blazer) out to Warrenton to visit my bff Ashley. When I got to Ashley’s house to surprise her, she wasn’t there. Her mom said she had gone over to the tanning place and I knew exactly where it was and headed over that way.
I was on the service road in Warrenton, minding my own business and jamming out to some Ludacris. Specifically, What’s Your Fantasy. (For those of you who do not know what a service road is, it is a road that runs parallel with  the interstate.) I was coming up on the strip where the tanning place was and was about to turn in, I looked ahead and didn’t see anyone coming and proceeded to start turning. At that very moment, a car came flying around the corner and t-boned the passenger side of my car. They hit so hard that the blazer flew up in to the air, turned over and landed facing the opposite way on the other side of the street. I remember hearing the crashing sound and then seeing sky, grass, then sky again.
I wasn’t quite sure what happened for the first few moments following the impact. I remember hearing Luda in the background and seeing the car that had hit me sitting there in the middle of the road. The drivers head was laying face down on the steering wheel and there was a child crying. I unfastened my seat belt, and remember hitting my elbow and looking over. The passenger door was smashed in so far, that it was against the console. I got out of my car. I remember stepping out and my entire body was trembling. I was so afraid. I screamed help several times, though I don’t remember that. I had gone into shock. At this point, Ashley and the other people in the tanning salon had heard the crash and my screams and were running across the parking lot to me. They were calling 911 inside and checking on the people in the other car. Ashley was talking to me and seeing if I was OK. I told her that I didn’t know what had happened. She then asked me where the other kids went. I remember when I had gotten out of the car, there were several children and 2 adults in the car that hit me….and now there were only 2 adults and 2 children. The rest of the children were getting into a van that had pulled up. I later learned that there were more people in the car than what was legal and some of the kids were not properly restrained.

It seemed like just seconds had gone by, and there were all type of rescue vehicles showing up. A paramedic had come running to my car first. He asked me where the driver was. I told him I was the driver and he just looked at me. He said he just knew when he saw my car that I was ejected and laying on the side of the road somewhere. He wasn’t quite sure how I managed to have gotten out on my own and standing there. He asked me if I could follow him to the ambulance or if I needed to lay on a stretcher. I told him that I didn’t need any medical attention. A cop was walking up as I was saying that and said that I needed to get in the ambulance. I told him there was no point. That as soon as my dad hears about this, he would kill me and be pissed that he has medical bills to pay too!

The paramedic laughed and the cop said, “Honey, when your daddy sees that car and sees that you are OK, everything is going to be just fine. He isn’t going to care about anything else.” Still, I refused medical attention. Probably the biggest mistake I had ever made up to that point in my life. I sure did pay the next day after my adrenaline went down! EVERY muscle and bone in my body hurt. I could barely walk. My back was SOOOO messed up. That is a different story for a different day.

Ashley had called her mom, and her mom and step dad came down to the scene. Ashley’s mom had called the hotel where my dad was staying at and when she arrived she told me that the hotel was driving my dad and sister in a shuttle to come see me. I started to get real nervous because I just knew he was going to yell at me!

The driver in the other car was being treated, she wasn’t wearing her seatbelt and had hit her head on the steering wheel and was unconscious. There was a witness to the accident, a man behind me in a truck had seen everything. He said the other car was FLYING and there was no way that I would have seen them coming. He also said that the other car never even attempted to use their brakes. His story was confirmed by the police, as there was no evidence of tire marks or anything. They were driving nearly 65 mph in a 35 when they hit me. Missouri was a no fault state though, so we were each responsible for our own insurance.

When my dad arrived, he ran up to me and hugged me. He had tears in his eyes. My sister looked frightened. She said that she was in the pool when my dad got the call and they immediately got in to the elevator to get some clothes from the room before they left. She said my dad punched the elevator walls on the ride up. He called me mom, who had stayed behind in Georgia, and told her I was in a bad accident and that Ashley’s mom said that our car was totaled and that was all he knew. So she WORRIED the entire time until she heard my voice later that evening.

My dad thought it was ridiculous that I was worried about getting in trouble and refused medical attention. He said he was just happy I was OK. That a car could be replaced but I couldn’t be. So I was a little relieved even though I knew I would never hear the end of it, and to this day it still gets brought up quite regularly!

After everything was said and done, the blazer had to pretty much be reconstructed on the passenger side. It was only about a thousand dollars away from being totaled. It never drove the same after it was fixed, no car does. The driver of the other car ended up being just fine after she came to. I don’t really feel sorry for her. She should have been wearing her seat belt and not driving so fast. I hate that her kids were not properly restrained and she is really blessed that they were all OK.

If you have ever been in an accident, you know that crashing sound stays with you forever. Those moments right after the accident when I was in shock and didn’t know what was going on were some of the scariest moments of my life. I am so thankful and blessed to have walked away from that accident. While I spent MONTHS in physical therapy for my back, it could have been much worse. I have been in a few accidents since then, all accidents where I have been rear ended or the driver of the car I was in was rear ended, so yeah…you could say I am a little paranoid and certainly defensive in the car. 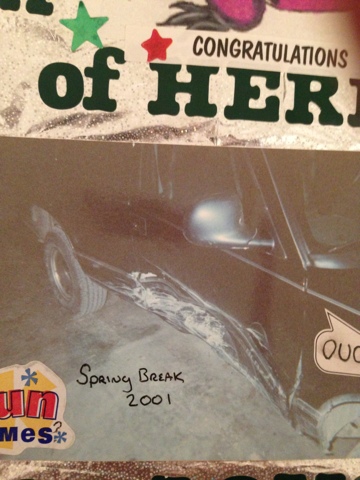 The only picture I have of the Blazer after the accident is in a shop after they pulled the passenger side out some. My parents were kind enough to put it on my locker decorations for senior week. For fun, here is a picture of the full locker cover. My dad used to call me Dino sometimes, Nadine…Dino…whatever. There are pictures of my late family dogs; Harley and Snowball. Harley was 18 when he passed away and Snowball was 16. You can’t tell from this picture, but my parents and my sister each wrote me a sweet note on the class of 2001 sheet. I took this picture this morning, I have this folded up in one of my scrapbooks for safe keeping. 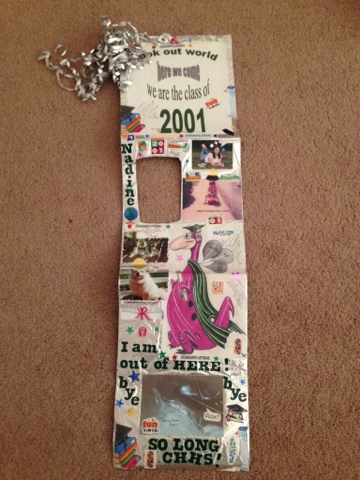 Not Everything You Learn is in School