The Tales of Elle

We all have that room in our house. You know the one. The one where everything goes to die. The room of randomness, storage, clothes that don’t fit, things that need to be filed, shoes that hurt your feet but are too pretty to go in the trash. For us it is our guest bedroom, you know…because we never have guests so the door has been opened like twice since we have moved in. Well, other than the times that we open it to throw crap in there.

I started cleaning it out this weekend because I need somewhere to work out in the mornings that won’t wake up my husband. It is amazing all the stuff that I was able to just throw away. I was going through one of the boxes and found some stuff that I had packed up from the desk of one of my old jobs.

The job was one of those jobs that I have many regrets about. I know everything happens for a reason, but gosh darn was it hard when I was going through it. It was one of  my first jobs when I moved to Birmingham. I took it to get myself out of another bad situation, and I knew that it hardly paid anything but I figured the grass had to be greener right? Well, only if you enjoy working for satan. I never actually entertained the idea that satan could be female until working for this company. The job itself wasn’t bad, I was managing a building in downtown Birmingham. Our tenants were wonderful, our maintenance staff were some of the best guys you could ask for, the property manager and accountant were as sweet as could be…but we all worked for satan. This women was such a bully. There were days that I literally would go to the bathroom for 15 minutes and hide in a stall just to get away from her. I have also found myself crying in that very bathroom stall, asking myself how I got into this mess.

The property manager “T” and the accountant “A” and I all started to become friends. You know, because what brings people closer than their hate for another person.

We would start sending each other hilarious ecards about our situation, and satan. We would make faces at each other when she would be talking to one of us, to keep the other person from crying or killing the nut job. Our office was the perfect set up for our shenanigans. A and I were in cubicles next to each other, and the property manager was at an open desk across from us, and could see both of us. The cubes had half walls, so even though I couldn’t see A sitting down, you could see over the wall in general.
I used to do some stupid stuff over the cubes to make A laugh. I would hold up a help me sign, or throw an airplane…anything to get through the day. One day A came in with her sons finger puppets and she kept the tiger one for Auburn, gave T a turtle and me…I got an elephant for Alabama…duh! I named my elephant Elle, and she began her own shenanigans instantly.
Meet Elle. 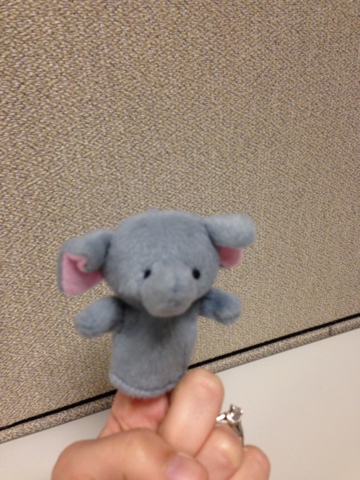 Elle would peek her head over the cube at A and tell her jokes or make her laugh. Sometimes she would wake at T while satan had her back towards me or start dancing. It became a daily thing. Elle would always come out at the best of times and the worst of times. She had a funny voice and always made things better. Elle also liked to tell it how it really was.
When I found her Sunday, I had a huge smile on my face. Even though it was a terrible work situation, I had some of the best times with those girls! I hate that we sort of drifted away from each other since then….but I only have fond memories of them and our time together. Thankfully each of us was able to find another job and get out of that place. I always see a dark cloud over that building every time I am downtown. Sometimes I text T a picture while I am driving buy and tell her that I smell something burning. It is amazing the joy that something like a finger puppet can bring you in desperate times.
Elle now sits on top of a pen in my new office to make me smile 🙂 The tales that Elle could tell you!
July 2, 2013 by Nadine

The Facts of Me