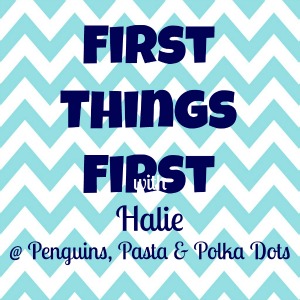 Linking up with Halie for First Things First on Tuesdays.
All of the questions today are linked together for me, as they all happened at the same time!
1. First roommate(s)
2. First time living away from home (when/where/why)
3. First college dorm room
The first time I lived away from home is my freshman year of college at UWG (University of West Georgia for those of you who aren’t super savvy on awesome southern schools.) How did I end up at such a fine, well known school you ask? If you remember correctly, I had just moved to Georgia in the middle of my sophomore year of high school. I was unfamiliar with schools in the south east, and wasn’t really sure which one I wanted to go to. My friend Shelley that I went to high school with asked me one day at lunch my senior year what college I was going to. I told her I was still a little unsure. She said, “Well I got accepted at UWG, why don’t you apply there and we can be roommates.”
My first response was, “What the crap is UWG?” She told me it was a decent size, but not overly huge school in Carrollton, Georgia about an hour and a half away. She said that town wasn’t real big and the campus was really nice.  She had me at not too big of a school and roommate.
I applied to UWG and was accepted, yay! We also applied for a special program for freshman that were coming in with good high school GPA’s. Our dorm room was in Strozier hall. It was a co-ed dorm on campus. I don’t have any pictures of all this on my computer because I started college in 2001…you know…before Myspace and Facebook. All we had was AIM., so I really wasn’t uploading all my pictures of every single moment of my life at the time.

Shelley and I were great roommates. We were both in school going after our BBA in the business area, her marketing and I real estate…so we had a lot of the same classes and even took some together. I think my favorite class we took together was ballroom dancing. It was quite entertaining!

There are so many fun stories that we have from our freshman year as roomies! Shelley and I used to run at night around campus. Main Street in Carrollton runs across the front of campus, and across the street are all the fraternity houses. The campus was pretty much one big circle, and so when we ran at night…we would run the circle a few times. One night, we were running down the Main Street part of it, and we both had on shorts that said “UWG” on the butts. Classy, don’t hate. Anyways, when we were running down Main Street, we passed a group of guys and they said “Nice bumper stickers, ladies.”

Another day, it was raining outside and we were walking back from class. We were both wearing flip flops and the walk way into our dorm was really slippy. I fell flat on my ass in front of a group of people, and Shelley, the great friend that she was, decided to just stand there and point and laugh at me. Bitch! (Just kidding, love that girl!) So we went inside and changed and got ready to go to our next class. When we were walking back out, Shelley was running her mouth and making fun of me about how I fell. She ended up falling, only this time there were a TON of hot guys standing out there under the overhand. Karma sucks, doesn’t it my friend?

There was another time we were at Sonic with one of our friends pretty late at night. We were getting ready to leave and Shelley was driving. I said something like “Reverse this bitch” and Shelley replied, “Oh yeah, thanks!” She had the car in drive and had I not said that….we would have run right into a brick wall.

Ah yes, nothing like a little walk down memory lane!

Confessions – Things I am NOT OK With

The Facts of Nadine