We left off part one with the amnionfusion to take some pressure off the umbilical cord. Spoiler alert – it didn’t work.

They had to keep quitting the pitocin because her heart rate kept dropping. Every time they turned the pitocin off, my progress would start going backwards and the contractions would spread back out and I never dilated past 5cm.

The doctor finally came in and started talking other options. He said that if Zoe’s heart rate continued to drop during my contractions, he wanted to go ahead and get her. No reason to stress baby out anymore than needed. I told him that my birth plan was only to get the baby out safely, and if he felt a c section was the best option…then I was fine with it. He told me he really appreciated that attitude because it made it easier on him. and to hang tight for another 30 minutes to an hour to see how things would go.

I noticed that the nurse was going ahead and getting things prepped anyways, “just in case.” She looked at the contractions and heart rate again a few minutes later and immediately called the doctor back. I could tell by how fast she picked up her pace around the room that he was coming back to tell me a c section was happening sooner than later.

Sure enough, the moment he came in and looked at the printouts he said, “Ok, I don’t want to stress this baby girl out anymore. Let’s go in and get her!” Immediately the room filled with lots of people buzzing around, they were shoving scrubs at Chris and his mom was helping him get in to them. this became an emergency situation fast! I started to cry. I don’t know why? Maybe because I didn’t think it was going to happen like this. I mean, it is major surgery and I was certainly scared about that aspect but now I was worried about the baby too and I remember looking around the room and catching eye contact with Chris, my mom, my sister, my dad….and the tears just flowed and flowed. The last thing I remember happening before they all left the room was my dad coming up to my bed and kissing me on the forehead and telling me it was going to be ok.

Next thing I know, I am being wheeled down to the operating room. It was so bright and so cold in there!!! I was shaking from the epidural and being scared. They had to hold my body down to start hooking me up to stuff in there because of how bad I was shaking. I remember one of the doctors in there telling me it was ok and that Chris was going to be coming in shortly and standing next to me. Then I started to feel really out of it. I remember having the hardest time keeping my eyes opened but I could hear everyone in the room running around, ripping things opened, shouting back and forth at each other, and then next thing I know….the doctor is telling Chris to stand behind my left shoulder.

I remember hearing Chris’s voice next to me saying “Is she ok?!?!” And I felt his hand on my shoulder. I remember hearing the doctor telling him that I was a little out of it but that I could hear everything that was going on.

It seemed like a second later they were telling me that Zoe was here. I remember them telling Chris “come on over here with us daddy!” and I could hear Zoe crying. I heard them calling her birth at 10:20am.

Then what seemed like one more second later, Chris was back behind me and he placed Zoe on my chest on her side and was holding her up on me with one hand and someone saying “Open your eyes Nadine, your daughter wants to meet you!” It took all my concentration to open my eyes but when I did, Zoe was staring right at me. I remember saying “Hi Zoe” and her and I just looked at each other for a few minutes and I remember feeling instantly so full of love and joy for this little girl staring at me. And even though I was completely out of it, I focused on just keeping eye contact with her and not wanting to look away for even half a second. What seemed like maybe a few minutes (???) went by and then they told me that Chris was going to go with Zoe and the nurses and they were going to finish up with my surgery so that I could go have skin to skin back in the recovery room.

When they opened the door to the room, I remember seeing Chris sitting in a chair holding Zoe. The site immediately made me wake up and be more aware of what was going on.

The nurse got Zoe and brought her over to me and asked me if I was ready to start her first feeding. And just like that, I was holding little Zoe Jane and nursing her for the first time. She latched instantly and I remember listening to her little noises and knowing that everyone was right about what they say about having a child. That you never knew you could feel so much love for someone so tiny that you just met, but it was instant. And strong. And fierce.

Chris went out to the waiting room to let everyone know that Zoe was here, that she was 7 lbs 20 inches and that we were doing good and he would come back for them soon. He showed them a picture of her on his phone and that is when his dad captured everyone getting to see her for the first time. This picture is everything to me!!! 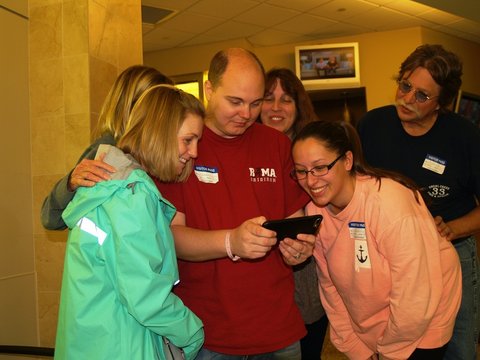 I think we were back in the room with her alone doing skin to skin for about an hour and then I told Chris that I was ready for our family to come back. I felt bad they had all stayed over night and hadn’t been able to see us and I knew that they were dying to meet Zoe. The nurse told me that they could come back for a few minutes to see her, and then they were going to move me to our suite and that our family could go wait on the 6th floor in the waiting room until we were settled in our room up there. 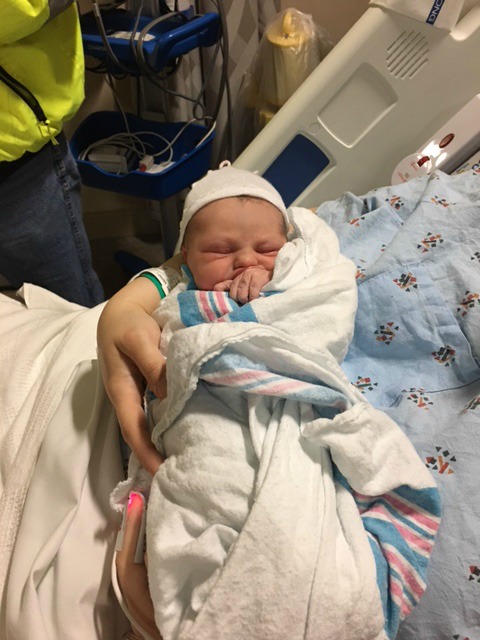 I remembered the smile on each of their faces as they entered the room and looked right at Zoe laying in my arms. My mom was the first person to hold her from me and then Chris’s mom. Each of them took their turn and got pictures with her before we moved to our suite.

And just like that, this tiny little girl came in to the world and stole all of our hearts. All 7 pounds 20 inches of pure sweetness! Her apgar score was an 8 or 9, and I remember feeling so proud of her passing her first test with flying colors 🙂 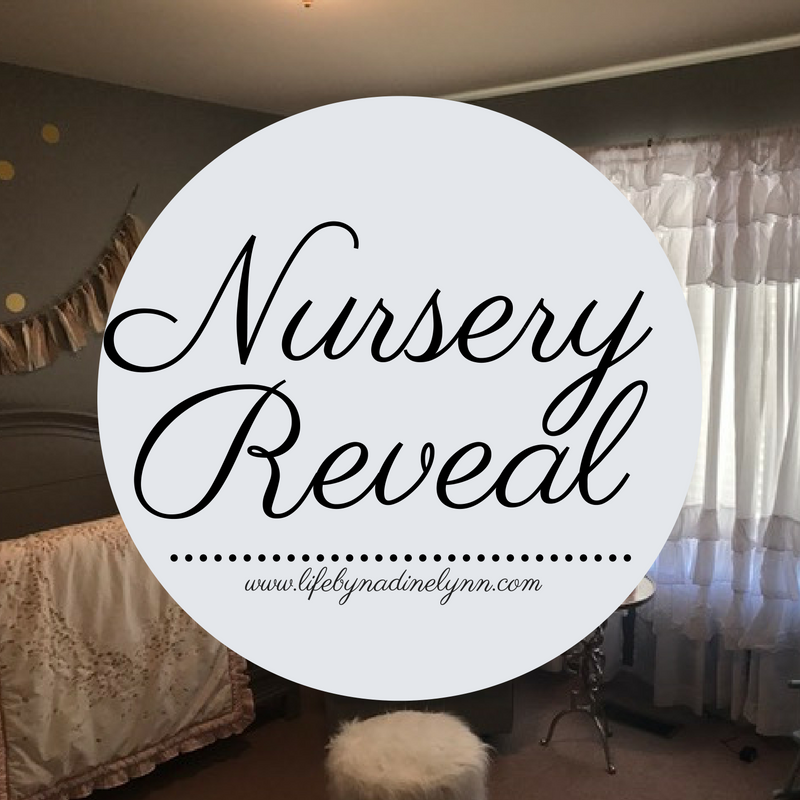