Weekend Shenanigans-The One With the Long Weekend

Well hello there blog world. I took an unintentional four day holiday weekend from my blog too apparently. Whoops.So there is a few things on my agenda today. Forcing myself to go to work after having 4 days off, making myself blog because I was a bad bad girl….and celebrating the fact that when I opened blogger this morning I realized that this is my 200th post! Woo hoo!
Let’s get on with my weekend, shall we?
Wednesday we shut down the office a little early, so I headed to Target to pick up breakfast items for the weekend. When I was leaving, there was the cutest old couple in wheel chairs racing each other out the doors! I followed them outside, and it is hard to tell from this picture, but they caught back up with each other and rode side by side the entire length of this shopping center. It just warmed my heart! I texted this picture to Chris and said,  “I hope we are racing our wheel chairs out of Target in 50 years!” So darn cute! 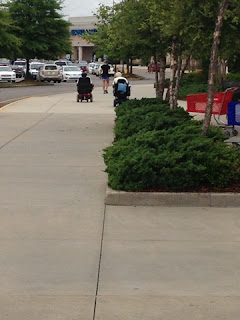 Wednesday evening we headed over to my sister in laws for dinner and hung out for a few hours with them. Andrea and I are addicted to Ruzzle. Have you played it yet? It is like Boggle and super fun! You can download the free version on your phone. If you get it, let me know and we can play 🙂
Thursday Chris had to work in the morning, so I did 3 loads of laundry and hung out with the dogs in the morning, then we headed over to Bargain Hunt in Birmingham when he got home. We ran into his parents there, ended up going out to lunch with them at J Alexanders and then we went to their house later that night to ring in the 4th.
Friday we had a road trip planned to Huntsville. There is a Bargain Hunt up there that we were dying to check out. Let me save you the trouble…the Huntsville Bargain Hunt is the most sucktastic of them all. They didn’t have a darn thing we wanted. It wasn’t a wasted trip though…we also checked out this place called Gamers Paradise. That place rocked. 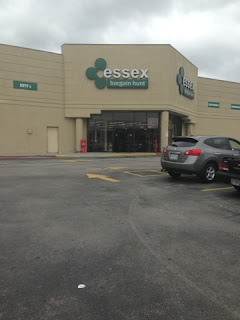 Then we had to choose between Steak n Shake and TGI Fridays for lunch. TGIF won. It was Friday after all. This deliciousness happened! 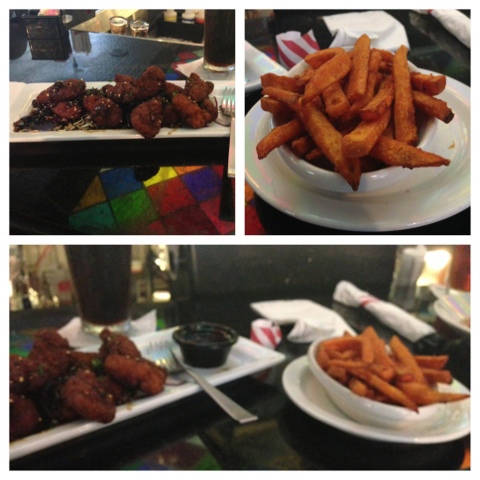 That’s right I ordered an appetizer for my main dish, judge away! (With a side of sweet potato fries.)
After lunch we met up with one of Chris’s friends that lives in the area. We met her at this place called Stem and Stein. That place was the most awesome place ever. I wish we had something like that in Birmingham! We hung out there for like 5 hours and met a ton of cool people. I tried 3 amazing beers while we were there, and sampled some wine.
My beer loved me back, as a heart appeared in the foam! I should have taken a picture of it about 5 seconds earlier because it was the perfect shape before it started to drift away! 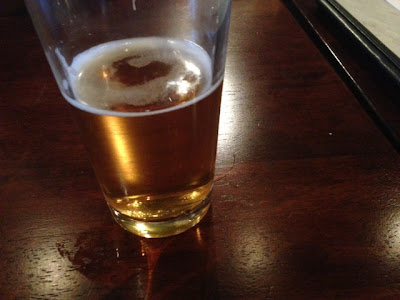 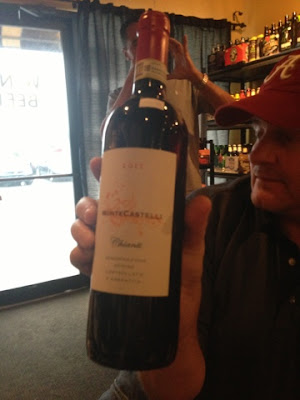 A yummy wine and a new friend! 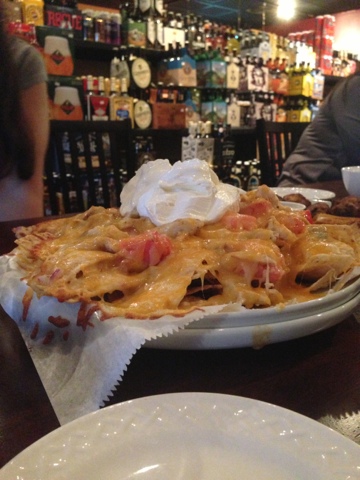 Yummy nachos had to happen!
Saturday I made a breakfast pizza. It turned out super yummy and tastes even better left over! I will be sure to post the recipe this week! 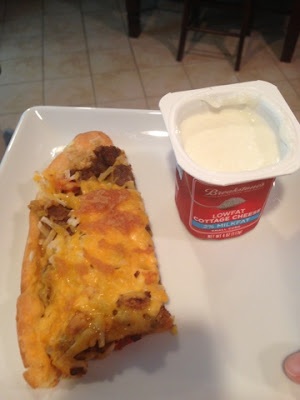 Saturday was a total day of lazy and I loved every darn minute! Saturday evening Chris and I turned out living room into a bowling alley and had some fun! 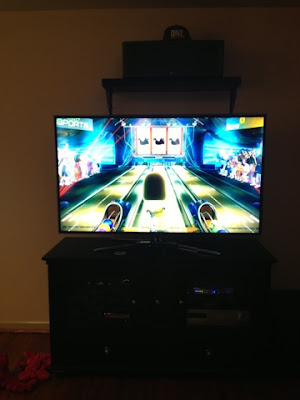 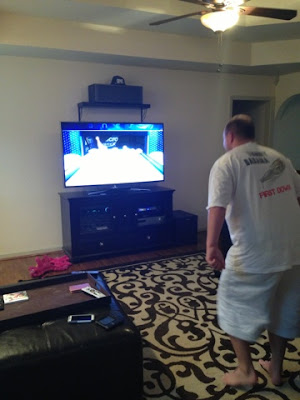 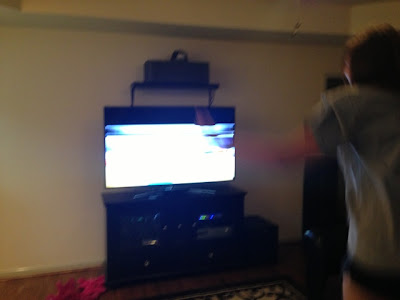 My victory dance. I got a lot of strikes 🙂 I am way better virtually than in real life!
Sunday we met up with Chris’s sister and brother in law for our usual weekend trip to Bargain Hunt Birmingham and lunch! That’s right, we were at Bargain Hunt 3 times this week and would you believe we found stuff yesterday. Goes to prove that you just never know when it is worth going! We had lunch at Baumhowers, our last bad meal. We went grocery shopping last night and let’s just say there was NOTHING bad in our carts. Time to buckle down!
I hope everyone has an awesome week! I can’t believe how fast the last 4 days went by. Work is going to be tough today, but someone’s gotta do it!
July 8, 2013 by Nadine

Things I Am Loving