Oh Wednesday, you give us hope. A light at the end of  the tunnel we call Friday. You are the half way point.
So today I am going to link up for the “I don’t know about you but I’m feeling 21.” We are supposed to talk about how awesome and epic our 21st birthday was. 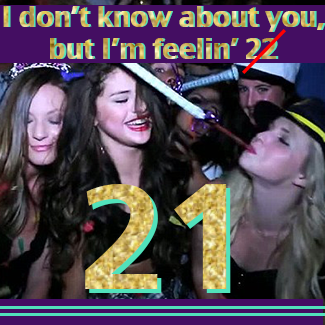 My 21st birthday party with my friends was so epic, that I don’t know that I have any pictures for it. It was August 17, 2004….so you can imagine that times were a little different then. Social media was just getting started, and you had to be a college student to join Facebook. In fact, I didn’t join Facebook until just a few months before I turned 22. I was more of an AIM person then. I had an extensive buddy list and an awesome away message and profile, OK!?
Oh to be 21 again. My friends had a party for me to celebrate my 21st birthday. School had just started back and it was my last year of college. (I graduated when I was 21.) I remember our friend Nathan brought over a HUGE ass bottle of absolute vodka. And that is all I remember. Ha, just kidding! Sort of. I just remember hanging out at the apartment, listening to music, dancing, drinking and having an awesome time. That was the one and only time that I had gotten so drunk that I could barely walk and didn’t feel so hot the next morning. I didn’t really ever have hang overs then. The truth is, I don’t like to be drunk. I don’t like losing control over my body. Some people call that being a control freak or OCD. I just call it being awesome, OK?
On the actual day of my 21st birthday I traveled out to Alabama to see my parents. They took me out for dinner to O’Charley’s in Oxford. You might be thinking, O’Charley’s? Really? Well it was the one of the only restaurants in the area so it was a big deal haha!  They bought me my first legal drink. It was a White Russian. Yum!
Since I don’t have any pictures of the said events, I am going to photo bomb you with 3 random pictures of when I was 21. Enjoy!
﻿

(This is why you should never go to the tanning bed. That is so not natural!)

Because it is Wednesday, seriously, I cant get enough of the Hump Day Camel. Or Liz! So go link up and find some new friends. All the cool kids are doing it.