Happy Monday everyone. Somehow December crept up on us this weekend! I know, I am as confused as you.
So how was your weekend? I will break mine down for you. Link up with Sami, Dana, and Leeann.
First, let’s start with a confession. Friday, I posted about how I got frustrated with my Christmas tree, and stated that I would be decorating it this weekend. Fail. I did not get around to decorating the tree this weekend, however, I did decorate our fireplace. It is getting to the point where if I don’t do it soon, it won’t be worth it! Maybe tonight!
Friday night after work my sister came over for a little while. She had asked me to pick her up some items at Whole Foods on my way home from work for her. You see, we both live in the middle of no where, she is even further out than me. So, it is a big ordeal for her to drive an hour for some organic kale, so I helped her out since I work right down the street from Whole Foods. It was great seeing her and the boys (I have 2 nephews and 2 nieces with her.) After she left, Chris and I decided we were going to have a lazy Friday, and we sat and watched TV and were in bed before 10pm. Such is the life of old folks, right?
Saturday was the SEC Championship game. Can I just say ROLL TIDE! Goodness, that game had me so nervous I had to go into the kitchen several times and consume ridiculous amounts of cheese dip, buffalo chicken dip, and BBQ meatballs. We watched the game at my sister-in-law’s house. After the game, the boys were starting to get drunk, I can’t imagine why?! So, us girls decided to go on a late night outing to Kohl’s. 20% off coupons and being opened til Midnight sounded like a great idea! We headed off to Starbucks to get our sugar crack fix, and headed on a wonderful shopping trip. Can I just say how much I love shopping! It was tons of fun, and I may have accidently bought 2 pairs of shoes. Oops!
That brings us to yesterday. It was a chill day because Chris was too awesome Saturday night, and wasn’t feeling super great yesterday. You gotta watch how much awesomeness you rock sometimes! We basically hung around the  house all day watching Hardcore Pawn and Pawn Stars and consuming Mexican food. I did mange to go grocery shopping, but that is about it!
I hope you all had a wonderful weekend! Keep it classy!

Some pictures of our crazy dogs! 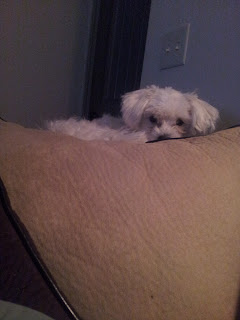 Mac thinks he is a cat and lays on the edge of the sofa. 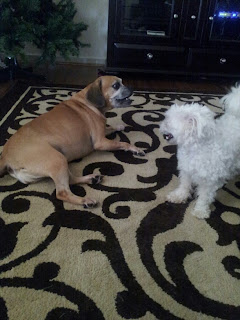 You can see evidence of the unfinished Christmas tree behind Gracie. 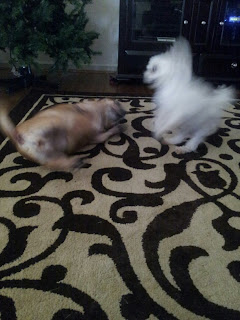 I think this says it all! 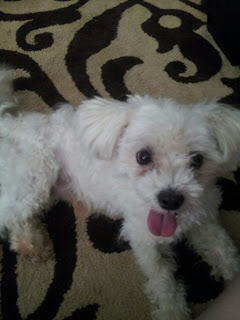 Someone is SUCH a ham!
Also, Katie over at Simply Call me Sylvia is doing a GIVEAWAY! We all love a giveaway! She made an adorable scarf and headband, so go sign up for the giveaway and follow her page!
December 3, 2012 by Nadine