Tattoos. Every person out there has an opinion about them. There are three types of people out there. You either love tattoos, hate them, or don’t ever want one but are indifferent of others who have them.

Some consider it a form of art, others consider it a form of rebellion. Most people that have a tattoo will tell you that theirs is just meaningful for them. Maybe you were going through a hard time and getting your tattoo was some how spiritual or therapeutic for you. Maybe you are a girl that just turned 18 years old, and has parents who have tattoos and you just knew that you always wanted one and always knew exactly what you were going to get. You have  your dad draw it, because you don’t really have anything in common with him, except this appreciation for body art. He is a very talented drawer, and you feel so special that he created a design just for you. Maybe you add two hearts in memory of your Grandpa Carl and Grandma Jerry because they were the two most important people in your life that you lost too soon.

Maybe that 18 year old girl was me. Yes, I have a tattoo.

On August 17th, 2001 (my 18th birthday) just a few days after I started my freshmen year of college, I met my parents at Ink Wizards in McDonough Georgia to see my dad’s tattoo friend for my first tattoo. It was my birthday present from my parents that year. I remember taking the sketch that my dad created and asking Jeremy if he thought it looked good. He asked me where I wanted it, I told him my upper right shoulder blade, and that was it. A few hours later I emerged from the studio, feeling like such a damn bad ass for being able to deal with the needles long enough to get inked. You have no clue how big of a baby I am with needles and pain. I can’t tell you how freeing the experience was for me.

I love my tattoo, and there has never been a day that has gone by that I regretted getting it. I can’t remember who, but someone once asked me if I was going to cover it up for my wedding. Why would I do that? My tattoo is me. It means so much to me, and I got it knowing that if I wore anything barring my shoulders, it would surely show. I was almost insulted being asked that question.

You don’t have to like tattoos. Everyone is entitled to their own opinion. I just feel like you should never judge a person because they have one. I was the “goody goody” in high school. Never one to get in trouble or bring attention to myself. I am more of a shy, reserved person. When people find out I have one, they almost always say “I never thought you would be the type of person to have a tattoo.” What does that even mean? Is there a type? 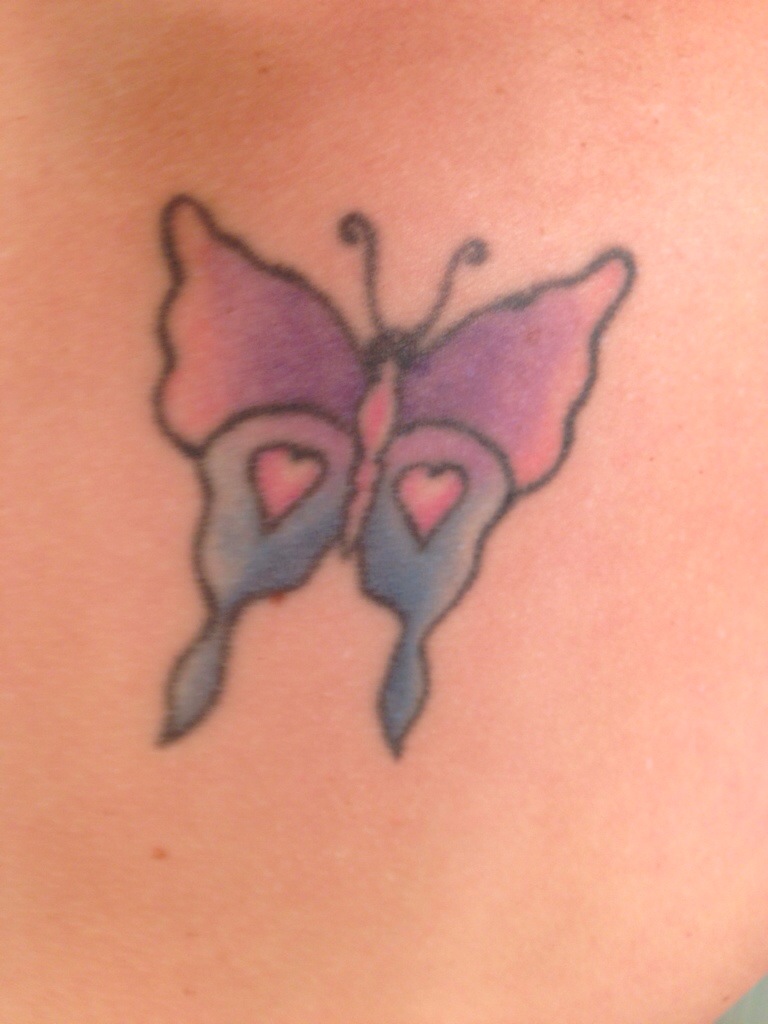 (Sorry for the horrible quality of this picture, it is incredibly hard to take a picture of your own shoulder blade with an iPhone.)

Truth be told, I really want another one. I have always wanted more than one before I even had my first one. I want one on my inner wrist. I have been working on what to get there for years. I have three ideas, and I think I have finally figured out what “the one” is! Now I just need to track down Jeremy. You see, he has gotten quite popular since I met him back in 2001. He has been on TV shows, won all kinds of national awards, and now has two shops. Karmic Tattoo in his original starting point….McDonough, GA and now one in FL as well.

Do you have, or would you ever get a tattoo?

It’s OK…Thursday is almost over!