Tales of Property Management – The Tale of The Crazy Resident (Literally) 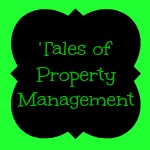 So in a former life (3 years ago when I lived in Atlanta) I worked in property management. Residential property management to be exact. If you are unfamiliar with my fancy smancy terminology…you know you apartment leasing office? Yeah well I worked there. For five whole years. Property management isn’t something that one necessarily sets out to go to college for. When I decided to major in Real Estate, it wasn’t so that I could hear every damn story under the sun about why Miss Princess in apartment 209 cant pay her rent as she walks back out to her car with her fake tears, carrying her designer bag and hopping into her BMW. That happened every. single. month. But don’t get me started! How did I end up in property management you ask? The real estate market was kind of scary and sketchy and I ruled out some of my other options the longer I dug in to my course work. I was bound and determined to get a job doing some thing real estate related when I  graduated though so there I landed. A steady paycheck I said. Just to get my feet wet I said.

Now, I will say that I worked with some AMAZING beyond amazing people during those five years. People I will never forget and will always be considered my friends. But I also worked with some scum and someone who I am convinced might have been the devil herself. Which makes me think the devil may very well be female. Go figure, am I right?!

Anyways, you wouldn’t believe the stories that I have to tell! I think around my second year in the business I decided that there wasn’t anything that could possibly happen that would actually surprise me anymore. And around year five I realized that yes….crazy shit is still shocking!

If you live in an apartment community, please do me a favor and be nice to your leasing staff the next time you have to call to place a work order or drop you check off. (Check? Do people still write those things these days? Yes, so they can accidentally post date it for a week out when their paycheck gets cashed and just have “not been paying attention” and are “so sorry.”) You wouldn’t believe the drama that they put up with every day in order for you to enjoy your apartment and keep you as safe as they can.

Not all my stories are about crazy people. There have been days where I cried in my office with a resident who lost their job and can no longer afford gas to get to job interviews, let alone rent. I have cried with a resident who lost their beloved dog of 10 years came to my office daily for almost a month because they were now lonely in their apartment and just wanted to talk to someone. I have seen kids who just graduated college start out with a roommate and two part time jobs to make ends meet and a year later they are moving out because they landed the job of their dreams and got their stuff together. I made friends, I gained family. I wouldn’t take back those five years I spent in those leasing offices.

For every pull of the heart string story, I have a story that will make you laugh. Cringe. Wonder what happened to humanity.

The last community I worked at before I moved to Birmingham was my baby. It was a lease up and I watched it grow from the ground up. It was in an area of Atlanta that has really blossomed in the last few years and every resident that moved in was like adding a member to the family. That was by far one of the best staffs that was hand picked by my favorite property manager I had ever had. We had been together for four of the five years that I worked for the company. We split apart a few times, but always managed to find ourselves back together again.

We had someone who came to tour the property. She was a bit odd, and we learned very quickly how needy she was. One of my co-workers had taken her on her initial tour. I remember her telling me about the lady that evening and how odd it was. She was on tour with her for a good hour, which is crazy! Most tours last 20 minutes or so. The next day the lady comes back and asks for my co-worker I told her that she wasn’t in that day but that I would be more than happy to help her and that my co-worker would follow back up with her when she came back to the office the next day.

We went out on tour, and she wanted to see every apartment that was available to move in to basically. Absolutely ridiculous! I was out on the property with her for a good two hours. She had her “assistant” with her, and her dog. There were specific things about her apartment location that were a must. She was concerned about what direction it faced, when it would get sunlight, where all the access points were to get to her apartment, the different routes you could take, etc.

The next day she came back to lease an apartment. She told me she no longer wanted to deal with my co-worker she only wanted me. I explained to her that because my co-worker was the first person of contact with her that she was the one who would get her commission and type up her lease but that I was more than happy to do her move in inspection and take any work orders or requests that she had. Annoying, but whatever.

The apartments were BRAND NEW. She was the first person to live in it. A move in inspection there usually took all of 5 minutes. There was hardly ever anything wrong. Her inspection took an hour. She opened the AC vents, every cabinet, checked every slat on the blinds, every light fixture. I had never seen anything like it.

I walked back to the leasing office and it was pretty much the end of the day at that point. I finished up some paper work and left for the day. Later that evening I was walking Gracie outside and ran into our courtesy officer. He told me he was heading to check out a possible attempted break in. I asked what was going on and he said he got a call from some “weird lady” and told me the apartment number. It was the lady I had just moved in. Lovely.

He went and checked it out and talked to her then came over to my apartment and told me that she claims someone was on the roof and was trying to get into her apartment. Impossible. There was no roof access over there. She was on the 6th floor. There was just no way.

The next day she calls me in the morning, mentions nothing of the “break in attempt” but has a work order for me. Some thing is wrong with the light fixture in her bathroom. I send one of our maintenance guys up there and he comes back and pulls out his phone. He took pictures of the light fixture in question. She had taken it completely apart. She also removed the shower head in the shower. Weird.

A week goes by, she had called the courtesy officer out two more times for strange activity and people following her. She calls and places a work order with me that her apartment is hot and the AC isn’t working right. I send a maintenance guy up there and he comes back and shows me pictures of where she had taped a plastic bag over the return vent. Um HELLO! That is why your AC isn’t working. He had removed it and left a note telling her how dangerous that was and to not do that again.

A day or two later I walk in my office in the morning and meet one of the residents I had moved next to crazy lady. He was waiting for me at my office door. I ask him what is up and he says that I need to go over and check on his neighbor, that something wasn’t right and she was freaking out. I call my courtesy officer, and grab two of my maintenance guys and we walk over. We get into her apartment and she is crying about how the government is out to get her. How we have spies trying to get into her apartment. How the light fixtures have laser beams that if she looks at them, they will burn her eyes out. That we are seeping gasses through the HVAC system into her apartment and a bunch of other ridiculousness. She starts to get hysterical. I looked at my courtesy officer (he was a police officer) he pulls me out into the hallway and tells me to get my maintenance guys out of there and that we are going to need back up. I was like ummm she has gone crazy. Literally crazy! He agreed so I did the only thing I could think of. I called the Grady Psychiatric Emergency line and they sent an ambulance over right away. The lady had gone legit crazy.

We had to deal with her lawyers in clearing out her apartment. She had destroyed the place. Every light fixture was removed and in a million pieces. The HVAC system was completely messed up. She had taken a lot of the appliances apart. The windows were all covered up. She really thought people were spying on her. Completely paranoid. Her poor little dog. It made me so sad 🙁 I called her “assistant” that toured with her to come over and take the dog. We didn’t want it to go to the pound and her assistant was the only person that she put down for an emergency contact.

I have never seen anything like it before. It was scary and crazy. I really just felt bad for the lady. I often wondered what happened to her to get her so paranoid. Maybe she had come off medicine or something? Who knows. I am just glad that no one got hurt and she didn’t hurt herself.

In my next installment, I will share the time I became a detective and discovered a drug dealer.

Things I Am Loving