How I Met the One and Our Engagement Story

Chris and I started talking in November of 2009. We actually met through an online dating site. Judge if you want, but I was never really one to go out and meet people. I am a little shy around strangers, and lots of my guy friends said that I was “unapproachable.” Besides, I certainly didn’t want to pick up a boy in a bar or club either. I am not judging people that meet others that way, it just isn’t my personality. I liked online sites because you had to connect with a person emotionally before you connected with them physically. It was scary at times, because you never know if the person is honest with you. I met some real duds through that site, and was about to give up to be honest.

Chris added my profile as a “favorite.” I signed in one day and saw that I was added, and I looked at his profile. The first thing I noticed was his picture. I recognized the background, he was at The Summit in Birmingham. My parents had moved to Alabama a few years prior, and that is the place my mom always took me shopping when I would come visit. My initial reaction was that this was cool, the guy lived in Alabama…maybe I could become friends with him and have someone to hang out with when I visited with my family. So immediately, Chris went in to the friend zone in my mind. I sent him a message asking him if that picture was at The Summit.

Chris and I would talk through email a lot for about or month. I finally emailed him my phone number one day and said he could text me instead if he wanted. So we started texting, and one day he finally called me. He would call me every once in awhile. He mentioned a few times that maybe we should meet up sometime. I was really nervous because I didn’t want to get too close to him because I didn’t want a long distance relationship.

One day he had gotten tickets to a concert, and he asked me if I wanted to come. He asked me in the afternoon and the concert was that night. I was in Atlanta and had to work until 6:00pm, and the concert was in Birmingham. The logistics just wouldn’t work, obviously. I told him maybe we could plan another get together soon, you know…one with some advanced notice since we were in two different states.

We made plans to meet up in late December and go to Stone Mountain Park. They have “Snow Mountain” in the winter time. There is fake snow there and you can go sledding, and there is a Christmas Village and such. The day before we were supposed to meet up, I had to tell him I wouldn’t be able to go. I was very good friends with my boss, and her dog started to get really sick. I ended up working for her so that she could be with her dog before she passed. I am sure it sounded like a super lame excuse to Chris at the time, but it was the truth.

Christmas came and passed. Chris went to Gatlinburg with his family after Christmas and through New Years. He talked with me on the phone most of the trip. We started to get really close, well…as close as you could through phone and text. We decided that we would meet in person.

January 10, 2010 Chris drove out to Atlanta to meet me. We had talked about all different places that we could go. He mentioned taking me somewhere like Houston’s. I told him I didn’t have to have a fancy first date. We ended up eating lunch at Steak ‘n Shake and just going to random places around Atlanta. That night we went to Fellini’s and ordered pizza and took it back to my apartment and had a nice dinner. After that first weekend together, we became an official couple.

Interestingly enough, Steak ‘n Shake became a very crucial part of our relationship. It ended up being where we had our first “serious” conversation as well. Around the second week of February, I told Chris at Steak ‘n Shake that if things kept going like they were, and we were going for the long term thing in our relationship…then I would be willing to eventually move to Birmingham so we could be closer and not do the long distance thing.

On Friday, February 19, 2010, Chris came to Atlanta for the weekend. While I was at work, Chris texted me and said there was a restaurant at Stone Mountain Park that his dad suggested that we have dinner at. I thought it was a little random that we would drive all the way to Stone Mountain Park for dinner on a Friday night when I lived in downtown Atlanta, but I went along with it. When I got off work, I met Chris at my apartment and we drove to Stone Mountain Park. When we got there, Chris said that he wasn’t super hungry yet and he suggested that we take a little walk around the park. We realized that the trail to the top of the mountain and the lifts were closed, so we walked around the main area of the park. We ended up in front of the mountain, on top the hill and were in the “observation” area. When we got there, Chris said that he had to use the restroom and he walked inside. When he came back out, I noticed that a few employees were looking at us, but I didn’t think much of it. They were “security” type people and probably just thought we were crazy for standing outside in the cold.

Chris started talking to me about how Stone Mountain Park is special to him. How his family has been coming there to visit for years. How is was a place to “set things in stone.” Then, he reached in his pocket and said, speaking of stones. He pulled out a beautiful ring and said, will you marry me. I was shocked. Had no clue that he was going to do that! Of course, I said yes!!!

These are the two pictures that we took that night 🙂

This is what Stone Mountain looks like for those of you who haven’t heard of it.

And this is what it looks like in the winter 🙂 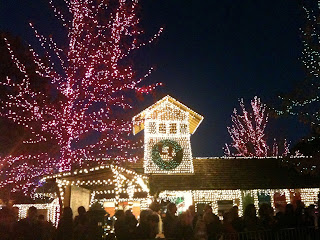 When we left Stone Mountain, Chris took me to Ruth’s Chris for dinner. They found out we got engaged that night, and gave us drinks and desert on the house 🙂 It was an amazing night, and I wouldn’t have changed a thing about it! Except maybe take more pictures!

Some people may have thought we were crazy to get engaged after only a month of dating, but when you know you just know. Why wait?

That is my love story. Happy Valentines Day!

Weekend Shenanigans – The One With the Bunny and the Kitties